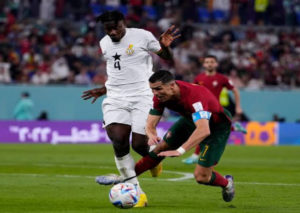 With the scores leveled at 0-0, the referee Elfath awarded the Portuguese a penalty after Muhammed Salisu was adjudged to have fouled Cristiano Ronaldo.

But a minute to the end of the game substitute Osman Bukari pulled a goal back for Ghana which was not enough.

Commenting on the decision by the referee to award the penalty, Aghahowa posited that it is contestable.

“The referee should have gone to the monitor to confirm that it was indeed a penalty. He didn't and that affected the Ghanaians.

"The penalty is contestable. My problem with that is the ref didn't even go to check.

"But thankfully they scored two goals and spiritedly went for the third and should motivate the team.”

And on Alidu Seidu who almost got himself sent off for reacting to a provocation from Joao Felix.

"Alidu Seidu's action was uncalled for. He could have been sent off for that and his team will suffer for it. African players have to be disciplined at this level.”