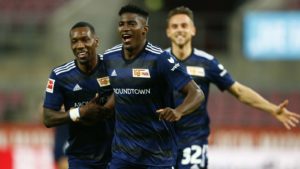 Nigerian youngster Taiwo Awoniyi has stated he prefers to leave Liverpool after failing to secure a work permit in the UK since his arrival in 2015.

Awoniyi joined the Reds five years ago following his heroics at 2013 Fifa U17 World Cup and 2015 Africa U20 Championship where he helped Nigeria win both tournaments in the United Arab Emirates and Senegal respectively.

Since his move to Liverpool, the 23-year-old has had seven loan stints in clubs across Germany, the Netherlands and Belgium.

He disclosed his ambition to play for the reigning Premier League champions but he was left with second thoughts after another loan deal was agreed with Union Berlin in September for the entire 2020-21 season.

"It is my dream to play for Liverpool. But me playing for Liverpool has to do with getting my work permit," Awoniyi told ESPN.

"Without it, there is no chance for me discussing about playing for Liverpool for now.

"This season was maybe a bit tough to make the decision because honestly, I was hoping to leave permanently.

"Liverpool have been great, they have been so supportive and we always talk with the director and every time, they tell me to be patient.

"But the reason I discussed something permanent this season was just that I felt most loans I have been to, have not really been the way I want it.

"And I felt like it happens that way because the loan players get less of an advantage than the players of their own club.

"That was what made me think, okay, maybe it's time to find a home with my family."

Awoniyi opened his goal account for the season with the opening strike in Union's 2-1 Bundesliga victory over Cologne a fortnight ago.

He is looking to build on the goal as Urs Fischer's side who are sixth in the German top-flight table and aim to enter the European qualification spots.

"Every striker wants to score. I am a player that also wants to work for the team," the Imperial Academy product said. "And to make the work you are doing on the field count is when you score the goals.

"The first three games I started, I really put in a lot of work and everyone was impressed. Some of my teammates were really feeling bad because I had not scored before then.

"Getting that goal was really something that that gave me the joy that finally it came. But now, I just have to forget about it and look forward to the next one."