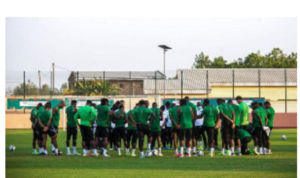 Nigeria's U-20 national team, the Flying Eagles on Sunday evening defeated the Black Satellites of Ghana 2-0 to start their West African Football Union (WAFU) tournament on a positive note at General Seyni Kountche Stadium in Niamey.

The sub regional tournament will produce two representatives at the CAF U-20 Nations Cup which will ultimately decide the continent's four flagbearers att the FIFA U-20 World Cup in 2023.

Nigeria went ahead in the 5th minute from a blistering counter attacking move finished expertly by Ibrahim Muhammad who rounded the Ghanaian goalkeeper to slot the ball into the gaping net.

The Ladan Bosso boys threatened to extend their lead but met the resistance of a strong Ghana defensive performance.

However, substitute Ahmed Abdullahi put the seven-time African champions in a commanding position when he doubled the advantage in the 78th minute.

The Flying Eagles will face Burkina Faso in their second game on Wednesday, May 11 at the General Seyni Kountche Stadium in Niamey.