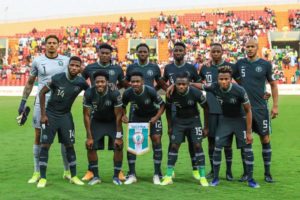 Taiwo Awoniyi hopes to put up a better performance in Nigeria’s second Group D game against Sudan at the 2021 Africa Cup of Nations in Cameroon.

Awoniyi was picked to lead the attack in Nigeria ‘s first game against Egypt ahead of Umar Sadiq and Peter Olayinka.

The forward was however criticised by many for his performance in the encounter which the Super Eagles won 1-0 courtesy of Kelechi Iheanacho’s fine effort on the half hour mark.

The Union Berlin of Germany striker is still expected to start against Sudan and he has promised to deliver the goods this time around.

“It’s just one game and things will get better. The most important thing is that we won and there will always be room for improvement, ” he said after the team’s training on Wednesday.

“Now, the Egypt game is behind us and what we are thinking about now is how to beat Sudan. They are good side too and we must be at their our best against them.

“Personally, I will strive to do better than I did against Egypt. ”

The game against Sudan is billed for the Roumde Adija Stadium, Garoua on Saturday.