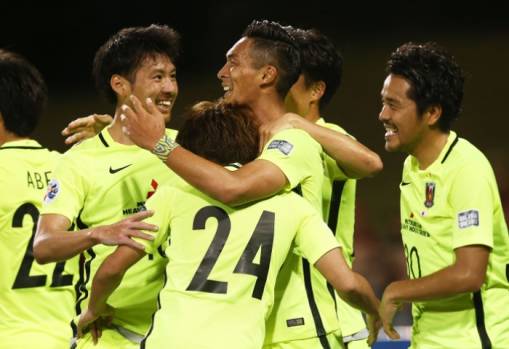 Kuala Lumpur: The clash between Shanghai SIPG and Urawa Red Diamonds in the 2017 AFC Champions League semi-final is sure to be a rollercoaster affair involving some of the best players from East Asia.

While much is known about Shanghai’s foreign contingent, Urawa’s stars are native to Japan and we have selected three to watch that represent the backbone of the side.

What is so impressive about Yosuke Kashiwagi’s 2017 AFC Champions League statistics so far, is that they have come from just six games.

Regardless of playing time, the midfielder is the second highest assist maker, and has made the third highest amount of passes in the opponents’ half (301), bettered only by two players – Carlos Eduardo and Mohsen Mosalman – who have played 10 games each.

Kashiwagi has also created 14 chances so far, which puts him inside the top eight among the semi-finalists.

The playmaker was sorely missed in the first leg of the quarter-finals against Kawasaki Frontale after pulling up injured in the warm-up, but returned in style in the return meeting as he assisted two of Urawa’s four goals.

Whether it’s whipped crosses from out wide, defence-splitting passes from deep, little dinks over the top from central areas or curling free-kicks, the Kobe-native is capable of every trick in the book.

Naturally left footed, although equally capable with his right, it’s the 29-year-old’s range of passing that sets him aside as one of the best technicians in Japan.

No player among the semi-finalists has touched the ball or passed it more times than Urawa centre-back Tomoaki Makino.

Those statistics are not only testament to the way the J.League side build from the back but also Makino’s consistency at the heart of the Reds’ defence.

Of players who have played in all 10 games of the campaign, the 30-year-old has the best passing accuracy (88 percent) and is no slouch in the defensive department either; ranking second in blocks and interceptions and in the top seven for duels won.

The Hiroshima-native had spells at his local side Sanfrecce Hiroshima before a two-season stint at FC Koln in Germany ended in his move to Urawa in 2012 on loan and then a permanent deal a year later.

Makino has normally been played as the left-sided centre-back in a three-man defence along with the likes of Wataru Endo, Ryota Moriwaki or new signing Mauricio Antonio.

While his partners in the backline have differed, Makino has been an ever-present and will need to maintain his form when facing an intimidating Shanghai SIPG attack.

A fan favourite amongst Reds supporters, Shinzo Koroki has often borne the sole responsibility of chief goal-getter for the Saitama club this season.

And it has been a faith well placed, with the 31-year-old currently the leading scorer in the 2017 J.League as well as netting four times on the continent.

Indeed, the former Kashima Antlers striker is arguably having his most prolific year of his career so far.

Not only has he been on target in Asia but he has also been bringing others into the game, ranking third in assists and within the top 10 for chances created.

With fitness concerns around fellow forwards Rafael Silva and Tadanari Lee, Koroki will need to once more take up the burden of leading the line for Urawa, with a place in the AFC Champions League final at stake.