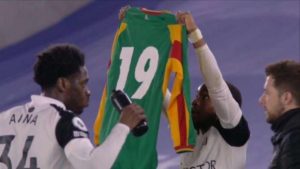 Ademola Lookman scored against Leicester in a Premier League clash at the King Power Stadium. The goal put Fulham ahead and the striker paid tribute to former Fulham and Senegal footballer Papa Bouba Diop, who died last Sunday at the age of just 42.

Fulham’s Ademola Lookman scored in the matchday 10 Premier League game. The Englishman’s celebration will be remembered more than the goal itself.

Lookman put Fulham ahead at Leicester and he also showed a Senegal shirt to pay tribute to the late Papa Bouba Diop who scored the first goal of the 2002 World Cup. Senegal shocked France 1-0 in that match.

France, who were defending the World Cup they won on home soil four years earlier, were eliminated in the group stage without scoring a single goal.

Back at the King Power Stadium, Fulham soon went 0-2 up after Cavaleiro converted a VAR penalty just seven minutes after Lookman’s goal. Even though Harvey Barnes pulled one back for Leicester late on, Fulham took home the three points in a 1-2 victory.