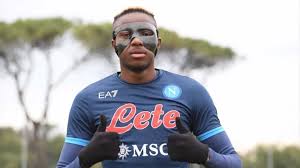 Injured Super Eagles striker Victor Osimhen has returned to training with Napoli yesterday two weeks after he got injured in a UEFA Champions League clash against Liverpool, Nigeriasoccernet.com gathered.

As reported by This Day Newspaper, the former Lille of France front man has joined the team training for his recovery processes.

His return was against the early  prediction of doctors' who reported he may be out until mid October.

In his absence, the Naples club have shot to the top of their Champions League group as well as the Italian Serie A.

Osimhen has two goals in his Serie A so far before the injury.