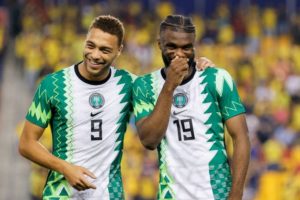 The match between the two countries will take place at the Oran Olympic Stadium in Algeria. The Super Eagles will be without first-choice strikers Victor Osimhen and Umar Sadiq for the match, with the duo unavailable due to injury.

Along with Moffi, the natural strikers in Jose Peseiro’s 25-man squad for the Algeria clash are Cremonese’s Cyriel Dessers and Nottingham Forest’s Taiwo Awoniyi.

Ahead of the anticipated match, Finidi has thrown his support behind Moffi to lead the Super Eagles’ attack in the absence of Osimhen. He said:

“Moffi has to do what he has to do to make it into the starting team. Osimhen definitely is the first choice once he’s back. He will take his place in the team but we have other players that are pushing him but Osimhen is always Osimhen.”

“There are other players that have other qualities that can make up for his absence, so we will see how it goes,” Finidi added.

Moffi has started the season brilliantly for Lorient, who are currently third in the French top flight. In eight league games, the 23-year-old has six goals. He is third on the list of top scorers, with PSG’s Neymar and Kylian Mbappe leading the way with eight and seven goals, respectively.