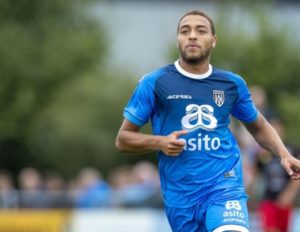 Red-hot striker, Cyriel Dessers will certainly give the Super Eagles number nine and Lille talisman, Victor Osimhen a run for his money should the Belgian-born finally see through his wish to play for Nigeria.

Dessers who is the current leading scorer in the Eredivisie with 12 goals in 18 appearances for Heracles has expressed his desire to represent Nigeria ahead of Belgium, having attracted interest from both nations.

And as a matter of urgency, the Nigerian Football Federation (NFF) have on their own part started making very serious moves to ensure that the 25-year-old gets to play for the Super Eagles in the nearest future.

The country’s football governing body have already convinced Dessers to switch international allegiance to Nigeria and have equally filed his application to the Federation of International Football Associations (FIFA).

As per whoscored.com, Dessers does not only bring goals to the table but he also sets up his team-mates to score as well with the reliable and prolific goal-scorer having made five assists in the Dutch league.

His finishing is strong while his style of play shows he likes to do layoffs, has a massive counter attack threat, indirect set-piece threat, likes to play long balls and he is also a very good dribbler.

His ball-holding skills and all-round play are also some of his football qualities and after so far netting 15 times in only 20 matches across all competitions for Heracles this season, Dessers can excel with Nigeria.

Versatile player, Ovie Ejaria is another one seriously knocking on the Super Eagles door even as the year 2020 which is now two weeks old progresses and that is as a result of his impressive form at club level.

Ejaria who has UEFA Champions League holders and run-away Premier League leaders, Liverpool among the list of clubs he has played for in his young football career is currently shining for Reading in the Championship. One of Reading’s standout performers this term has been 22-year-old Ejaria with the Liverpool loanee having lit up the Championship for much of the season so far since arriving at the Madejski Stadium last summer.

With three goals and three assists in 22 Championship outings, Ejaria has really thrived under the stewardship of Mark Bowen who has deployed the youngster largely in a central midfield role that has given him licence to roam.

Ejaria will no doubt prove to be a key cog in any real push for the play-offs that Reading manage to pull off between now and the end of the season with the youngster offering both goals and creativity that will prove vital.

British-born Eberechi Eze appears to be bidding his time but with more pressure from the Nigerian Football Federation (NFF) and Super Eagles boss, Gernot Rohr, the youngster can reach a decision on switching international allegiance.

NFF president, Amaju Pinnick believes the Queen Park Rangers midfielder can help improve the Super Eagles and had a meeting with Eze and his parents on the potential of the England U-21 star to switch his allegiance to the West Africans. Eze has been delivering impressive showings for QPR so far during the 2019/20 season, scoring ten goals and providing six assists in 27 Skybet Championship appearances which have caught the attention of the Nigerian football authority.

Pinnick is very much confident that the addition of the 21-year-old will boost the performances of the three-time African champions as they kick off preparations for the 2022 Fifa World Cup qualifiers in two months time, precisely March.

Meanwhile, Eze who has been compared to the legendary Austin ‘Jay Jay’ Okocha has previously trained with the Super Eagles.

This simply implies that the boy is good enough to do one or two jobs for the Nigerian national team.

The goalkeeping position remains a grey area for Gernot Rohr who has since proceeded to hand youngster, Maduka Okoye playing in the lower league in Germany one national team cap.

Number one, Francis Uzoho who is on the sidelines with a long-term injury had actually provided a few solid performances but old war-horse, Daniel Akpeyi has come back to replace him.

Akpeyi, however, does not appear as someone that can be totally relied upon and while Okoye represents a long term solution, Ikechukwu Ezenwa’s spot might be needing some re-evaluation. SC Kriens goalie, Sebastian Osigwe would make for a decent catch to put Uzoho and co. under check. Osigwe is Swiss-born and his father, Vitalis is an ex-Nigerian youth international and Enugu Rangers player.

As a 19-year-old, the goalkeeper was called up by coach John Obuh to represent the Nigeria U-20 side at the 2013 Toulon Tournament. The 25-year-old is a prominent player at Kriens since joining in 2014.

He helped Kriens rise from the Swiss fourth tier to the second division. This season, he has played every minute of his team’s 15 Swiss Challenge League games, keeping five clean-sheets and helping them to stay third on the log.

Greece attacker can play as up top, support centrally or even from the wings. Since ending his age-long union with Arsenal in the summer of 2018, Akpom has gone on to better things in Greece, scoring crucial goals to help PAOK secure the Greek Super League title last season.

This seaaon, he has four goals and two assists in 16 league games and he is no stranger to the Nigerian national team set-up, having engaged in a kick-about with the side in March 2017 alongside QPR’s Eberechi Eze. The 24-year-old announced his intention to play for the Super Eagles in September 2019 after previously representing England at youth levels, finding the back of the net 21 times in 42 appearances.