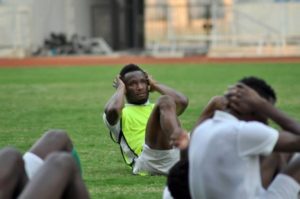 As expected, all the usual suspects were at the team's Eko Hotel & Suites camp with Captain Ahmed Musa leading 23 other players.

Leon Balogun, Tyronne Ebuehi, Ola Aina and William Troost-Ekong were the last quartet to arrive Eagles camp last night to make the list of those in camp swell to 24 players.

The three-time African champions will tango with the Lone Star of Liberia at the Teslim Balogun Stadium from 5pm on Fridayin one of the Match-day 1 clashes, with the Eagles flying out of Lagos to the island of Mindelo to take on the Blue Sharks of Cape Verde in aMatch-day 2 fixture on Tuesday, 7th September.

Eagles will have their first training session at the Teslim Balogun Stadium today.

Meanwhile, Media Officer of the Super Eagles, Babafemi Raji, has dismissed online media reports that the team was thrown out of the gym by an official of the hotel.

According to the Media Officer of the Super Eagles, Babafemi Raji who was present at the gym session, it was a minor misunderstanding between an assistant manager at the hotel and his members of staff on the usage of the gym facilities.

"We were scheduled to train just within the hotel with the gym session coming first then the outdoor volley session next.

"However, just as we were wrapping up the gym session, one of the hotel's managers came in to inspect and while the team trained at another section of the gym just doing light stretches, he yelled at his members of staff and that caused a distraction to the team's session which, although light, required concentration.

"While the back and forth between the manager of the hotel, his staff and some officials of the Super Eagles was on, the gym session continued and lasted 45 minutes, which was 15 minutes more than the earlier scheduled 30 minutes," observed Raji.

He further stressed that it was after the work out in the gym that Coach Rohr called the entire team together to give instructions on the next agenda which was the volley outdoor session," the Media Officer clarifies.