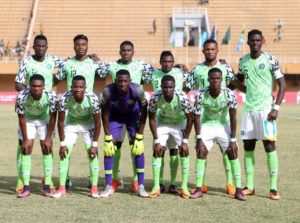 Nigeria’s Flying Eagles have been drawn in Group D to face Ukraine, the United States of America and Qatar in the preliminary phase of the 2019 FIFA U-20 World Cup finals in Poland.

The draw held at the Gdynia Sports Arena in Gdynia has pitted host nation Poland against Colombia, Tahiti and Senegal in Group A while African champions Mali will take on France, Panama and Saudi Arabia in Group E.

Group B has Mexico, Italy, Japan and Ecuador, and Honduras,.

New Zealand, Uruguay and Norway will make up Group C, while Group F is comprised of another African flag-bearer South Africa, along with Argentina, Portugal, and Korea Republic.

Nigeria finished as runners–up at the FIFA U-20 World Cup in 1989 (lost to Portugal in the final in Saudi Arabia) and in 2005 (lost to Argentina in The Netherlands), and won the bronze medals in the old Soviet Union in 1985 (when the Flying Eagles defeated the host nation on penalties in the third-place match).

The Flying Eagles defeated USA in the semi-finals of the 1989 finals in Saudi Arabia when two goals by Mutiu Adepoju settled the encounter and took Nigeria to a first-ever final.

Another of Nigeria’s Group D opponents, Qatar, shocked the world in 1981, when the country reached the final of the competition in Australia, only to lose to then West Germany.