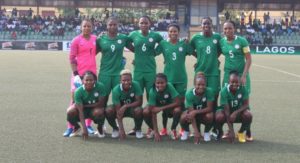 Cup holders, Super Falcons of Nigeria will spend eight days at a training camp in Abidjan to perfect tactics and strategy for the defence of their continental title before arriving in Ghana for the 11th Women’s Africa Cup of Nations finals.

The team, which has been camping at the magnificent Jubilee Chalets and Resort in Epe near Lagos – courtesy of the Lagos State Government for the past few weeks, will travel aboard an Air Ivoire flight on Tuesday morning to the Ivorian capital.

According to Thenff.com, the eight–time African champions will play a couple of friendly games in Sol Beni camp before flying to Ghana on 14th November – four days to their Group B opening encounter against South Africa’s Banyana Banyana

Dennerby will be joined on the technical bench by fellow Swede Jorgen Petersson, as well as Justine Madugu and Maureen Madu.

Hosts Ghana, Algeria, Mali and Cameroon will battle things out in Group A in Accra.