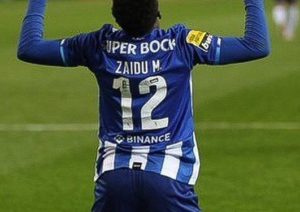 Super Eagles star Zaidu Sanusi helped Porto to a record 30th league triumph after scoring a superb stoppage-time clincher against Benfica in a 1-0 victory at the Estadio da Luz.

Porto traveled to Benfica in a fixture of great significance. Asides from being a clash between two of the most successful Portuguese sides, a victory for Porto would be enough to clinch a 30th league title.

It was a very tight affair, with tackles flying freely. Man in the middle Luis Godinho had a busy first half, dishing out four yellow cards in the first period.

Benfica thought they had gone ahead seven minutes into the second half, but Darwin Nunez’s goal was ruled out for offside. Both teams were very physical, and Godinho was not having any of it as he dished out an extra ten yellow cards in the second half.

Nonetheless, Porto looked stronger in the second half, with two shots on target.

However, the central moment of the game came four minutes into stoppage time.

Porto got the ball after a failed Benfica attack, and the dragons went on a quick counter immediately. Pepe made a brilliant run from his half, with support from Sanusi, who, with his blistering pace, pushed forward to support his Brazilian teammate.

In a two-on-one situation, Pepe laid a brilliant pass in the direction of the running Sanusi, who placed a sublime finish into the roof of the net to secure a 1-0 victory for Porto and their 30th Primera Liga trophy.