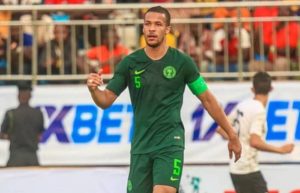 Udinese defender William Troost-Ekong says he is enjoying the competition in the Super Eagles camp, ahead of other challenges in his club.

According to him, he always like to fight and distinguish himself whenever more than three persons are scrambling for a position in the team.

“It is healthy to see three persons fighting for recognition. It makes the job more interesting and I am happy to be part of it,” he said.

With the Eagles boasting top quality defenders in the centre of defense and with the return of Kenneth Omeruo after a two-match absence, coach Gernot Rohr is having to make a decision on which pair should start against Benin but Troost-Ekong believes it should not cause discontent among the players.

Troost-Ekong and West Brom’s Semi Ajayi provided a fine defensive cover for Rohr’s men when they battled three-time world champions Brazil to a 1-1 draw exactly a month ago.

But Kenneth Omeruo, a 2013 AFCON winner and an impressive figure when Nigeria claimed a bronze medal in Egypt earlier in the year, is back to reclaim his starting spot.

However, instead of hostilities and infighting, Troost-Ekong is certain that whatever decision Rohr makes, regarding who is to start, will be accepted gladly by everyone.

“So it is good for us to be doing well for our clubs and fighting for the spot. So I think for Nigeria it is only good to have competition.