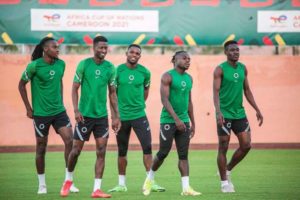 Wilfred Ndidi says the Super Eagles are battle-ready for Sunday’s second-round clash against the Carthage Eagles of Tunisia.

The Super Eagles will look to continue their impressive run in the competition when they face the North Africans at the Roumde Adija Stadium, Garoua.

“We are here to compete and win games. There is no difference between this game and the other games we have played here. Ndidi told a press conference on Saturday.

“It’s going to be the same approach and mentality. We will keep going.”

The West Africans came third at the 2019 edition of the Africa Cup of Nations in Egypt and are looking to win the title this around.

With a squad full of players who were part of the squad in 2019, the former KRC Genk of Belgium star explained the change in the team’s approach.

“It’s the same team, but different philosophy. Our current manager makes things simple for us,” added the Leicester City midfielder.

“The coach gives us the push and freedom to express ourselves. That’s the difference between 2019 and now.”

The Super Eagles have also enjoyed tremendous support from the local fans in Garoua and Ndidi believes that would spur them to victory on Sunday.

“It’s a big advantage for us. The people of Garoua have been supportive. They come out in large numbers to support us,” he stated.