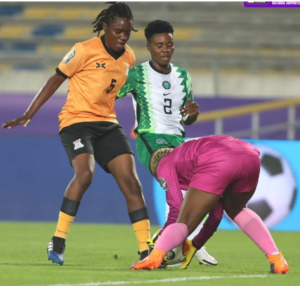 Former Super Eagles winger, Tijani Babangida has warned the Super Falcons to buckle up because Africa teams are gradually catching up with them.

Babangida stated this on the backdrop of the team’s 1-0 loss to Zambia in the Third Place match on Friday.

Recall that an own goal from the Super Falcons goalkeeper, Chiamaka Nnadozie earned Zambia their first major medal at the women’s football.

In a chat with Nigeriasoccernet.com, Babangida stated that teams such as South Africa, Zambia, Cameroon and Morocco are gradually catching up with the nine-time Africa champions.

” Again, it is also a sign that other teams such as South Africa, Zambia, and Cameroon are gradually closing the gap on the Super Falcons. Gone are those days the Super Falcons will dominate a team.

“A lot must be done if Nigeria must regain it rightful place in Africa. I am happy the team have qualified for the Women’s World Cup.”