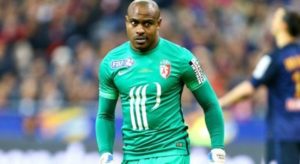 The 36 year old resigned from international football in 2015 after a row with former coach Sunday Oliseh and despite talks with the NFF about reversing his decision he stuck to his guns and stayed away from the national team.

Only recently he failed to bag a deal with Ligue 2 side Dijon but reports indicate he is close to a move as a free agent in the next few weeks and he has indicated that he is willing to represent Nigeria even though it’s not a priority ‎to him.

In quotes credited to the former Lille shot stopper, he will honor the call up even though he believe that young goalkeepers should be given the chance to showcase what they have for the future of the team.

“Nigeria is my country & I’m still ready to serve. If they want me to play & I am invited, I’ll still play & win games for the country”, Enyeama said.

“But it isn’t my priority. We have the young ones coming up – they should be given the opportunity to showcase what they’ve got.”