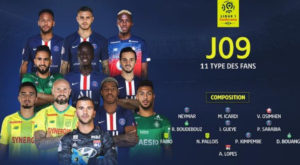 The Nigeria international has been named in the Ligue 1 Team of the Week following his fine, goalscoring display as Les Dogues claimed a 2-2 draw at home to Nimes at the weekend.

Super Eagles forward Victor Osimhen has been recognized yet again as one of the French top-flight’s best eleven players of the week after rescuing a point for the Lille OSC at Stade Pierre-Mauroy.

Osimhen joins PSG’s duo, Neymar and Mauro Icardi, in the league’s best XI among three other players from the champions. No other Lille OSC player made the cut.

With Nimes leading the home side 2-1 with less than a quarter of an hour left of play, the 20-year-old striker popped up in the opponent’s danger area, scoring the equalising goal and rescuing the Great Danes from a home defeat.

Osimhen’s goal against the Crocodiles was his eight strike for the club he just joined over the summer and it ensured Christophe Galtier’s men extend their unbeaten run in the French top-flight to four games.

The youngster has also grabbed another two assists. He has now been rewarded for his fine performances by being named as one of the most performing players in the week under review.

Osimhen is also in line to clinch the Ligue 1 Player of the Month award for September, having been shortlisted along with Algeria international and Monaco striker Islam Slimani and Nantes’s Nicolas Pallois.

Victor Osimhen will likely be a key player for Gernot Rohr’s men when the Super Eagles take on Brazil in an international friendly in Singapore on Sunday.