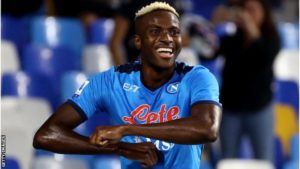 Former Italy defender Fabio Cannavaro has described Super Eagles star Victor Osimhen as a deadly striker that knows how to hurt an opponent in Serie A.

The Ballon d’Or winner stated this in an interview with TribalFootball, where he rated Napoli’s chances of winning the Scudetto as being bright this season.

Recall that Napoli currently sits top of the Serie A table with a 100% winning record in the league and the Nigerian international has scored four goals in the league.

Cannavaro said: “Spalletti’s team look like a wall at times and have different solutions. [Victor] Osimhen was thought to be a crazy horse, but in the box, he knows how to hurt the opponents.

“This Napoli are solid. “They can win the Scudetto. But beware of the two sides from Milan.

“Never rule out Juventus, they know how to manage the difficult moments and will be able to return.”