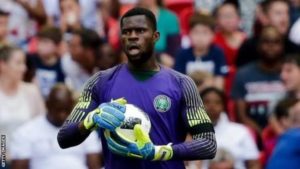 Uzoho started his season with the Cypriot side with a clean sheet in their first game of the season which ended 2-0 in favour of his team, who are now top of the league with two wins out of two.

” Clean sheet is good for the confidence of any goalkeeper and most times it’s a collective effort not just that of the goalkeeper. I have to credit the entire team on how we have started this season and hopefully we will sustain it”, he told Owngoalnigeria.com.

” I will travel for the game against Ukraine in a very good way. It’s still very early into the season and with lot of games coming up, the chance to get more games is certainly what I’m looking forward to before the end of the season “, he concluded.

20 year old Uzoho is on a season long loan deal to Omonia from Spanish second division side Deportivo La Coruna, his second spell on loan in Cyprus after spending the second half of last season with Anorthosis Famagusta.