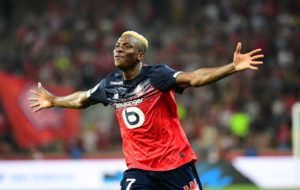 French Ligue 1 side Lille are still searching for their first win in this season UEFA Champions League after losing losing 1-2 to Chelsea in their second group game.

Beaten by Ajax in their first game, Lille were once again on the back foot when Tammy Abraham beat the offside trap in the 22nd minute to put Chelsea ahead for what was his seventh goal of the season.

Nigeria international striker Victor Osimhen proved that his fine run of form for Lille in the French Ligue 1 is not a fluke as he rose highest to head home a corner kick to draw Lille level in the 33rd minute.

Both teams looked even in all areas until Willian struck a well taken voilley from a cross from Callum Hudson-Odoi to put Chelsea back in front in the 78th minute.

The goal ended as the match winner for the visitors who were beaten in their first game at home against Valencia two weeks ago.