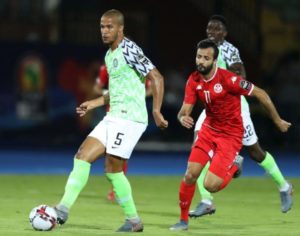 William Troost-Ekong has been named man of the match in the Super Eagles’ 1-0 win against the Carthage Eagles of Tunisia in their Third-Place match of the 2019 Africa Cup of Nations in Egypt, reports Completesports.com.

The Udinese defender put up a solid performance in the encounter to help the Super Eagles end the competition on a winning note and as the bronze winners.

It came as a consolation for the former Bursaspor of Turkey centre-back who conceded an own goal in Nigeria’s 2-1 semifinal defeat to the Desert Foxes of Algeria on Sunday.

Troost-Ekong is the fifth Super Eagles playerbto scoop the award at the 2019 AFCON finals.

Wilfred Ndidi, Kenneth Omeruo, Odion Ighalo and Samuel Chukwueze are the other Nigeria players who scoped the award in the competition.