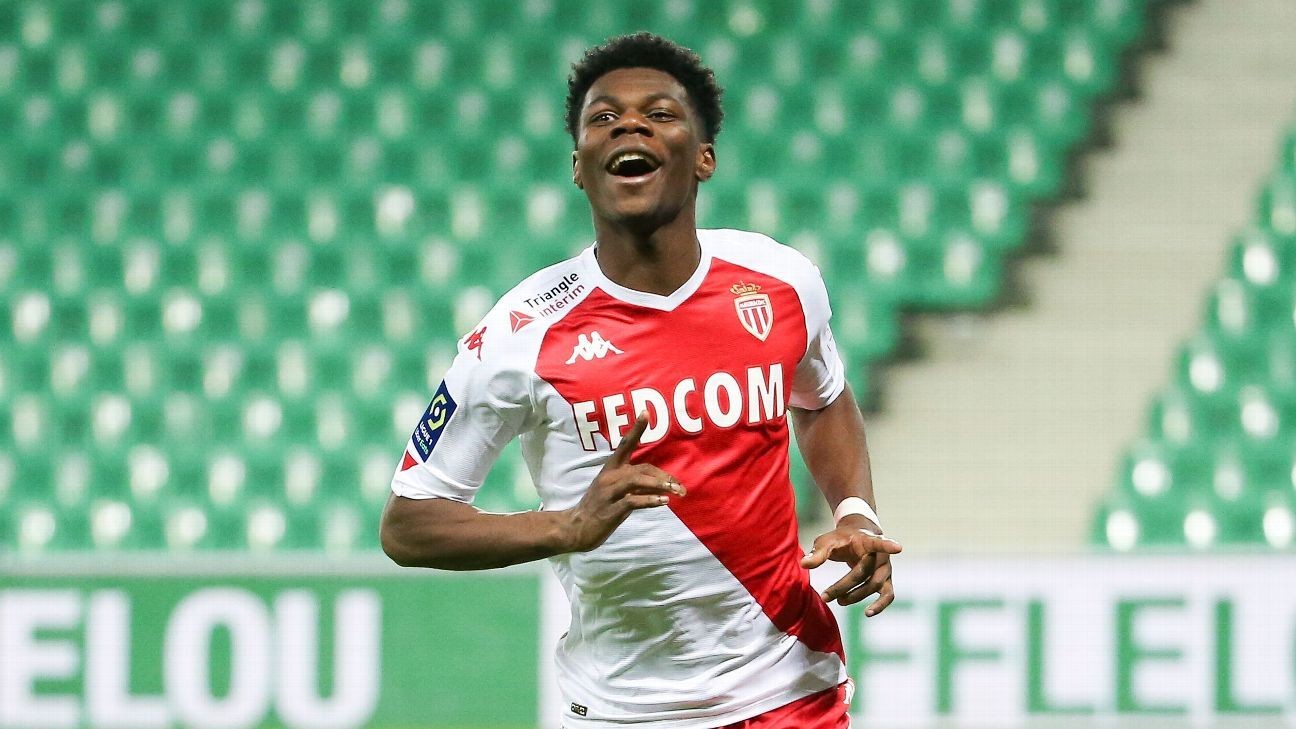 The summer transfer window was unlike any other; see all the major deals and check out how we graded the biggest signings. And just because the window is shut until January, that doesn't mean the rumours won't keep coming. Here is the latest gossip and speculation.

Monaco midfielder Aurelien Tchouameni is "on Real Madrid's radar," according to Marca.

Tchouameni, 21, started in France's 2-1 UEFA Nations League final win over Spain at San Siro on Sunday (stream the replay on ESPN+ in the U.S.) and has impressed in Ligue 1 for Monaco in recent seasons after the club paid Bordeaux €18m to sign him on a four-and-a-half year contract in January 2020.

Marca reports that Tchouameni is "one of the names that is most talked about" at Madrid's Valdebebas offices and has been identified as a possible successor, or alternative, to Brazilian defensive midfielder Casemiro, who is 29.

Chelsea and Juventus have also shown an interest in landing Tchouameni, who has the same agents as Sevilla defender Jules Kounde.

10.28 BST: Manchester United need to show some silverware for all their investment in their squad.

Jan Aage Fjortoft explains why Ole Gunnar Solskjaer needs to win something to keep his job at Manchester United.

09.57 BST: Football.London reports that Arsenal striker Alexandre Lacazette "has no intention of extending his stay at Arsenal once his contract expires at the end of the season, so a January move would ensure the Gunners don't miss out on a cash sum."

Alexander Isak, who has a €70m release clause in his Real Sociedad contract according to AS, is reportedly of interest to Arsenal and could move on.

Sources told ESPN that Atletico Madrid, Juventus, AC Milan and Sevilla are all interested in Lacazette. But with his contract expiring, the club may only be able to recoup around £15m on his transfer.

09.32 BST: Manchester United winger Amad Diallo's proposed loan move to Feyenoord could be back on in January, The Sun reports.

The 19-year-old had been set to join the Dutch club in th,e summer for the 2021-22 season, but he then suffered an injury in preseason that scuppered the move.

However, the Ivory Coast international recently returned to first-team training at United, resurrecting hope that he could still make the move to Rotterdam for some much-needed game time in the second half of the season.

08.48 BST: There are plenty of managers being linked with replacing Steve Bruce as Newcastle United manager across a range of newspapers in the UK, but one thing is clear: they all predict a change in the St James' Park hotseat soon.

Last week a Saudi Arabia-led takeover of Newcastle was completed with the Public Investment Fund (PIF), the world's largest sovereign wealth fund, buying the Premier League club in a deal worth just over £300m.

The Sun reports that former Chelsea manager Frank Lampard is a leading contender to took over on Tyneside, nine months after he was fired from his post at Stamford Bridge and replaced by Thomas Tuchel.

Earlier this week, the Daily Mail reported that Leicester City manager Brendan Rodgers, Rangers boss Steven Gerrard and former Dortmund coach Lucien Favre all being considered to replace Bruce, who is reportedly set to be relieved of his duties this week and is in line for an £8m payoff.

Meanwhile, the Daily Telegraph has linked ex-RB Leipzig coach Ralf Rangnick with the post, while The Times claims that Belgium national team boss Roberto Martinez is one of the frontrunners to replace Bruce.

- Ogden: Why are the best international managers ignored by the biggest clubs?

08.00 BST: Liverpool defender Ben Davies plans to return to the club in the summer when his loan at Sheffield United as he still hopes to build his career at Anfield, the Liverpool Echo reports.

Davies joined Liverpool in January in a £500,000 transfer from Championship club Preston North End as cover for Liverpool's many defensive injuries last season, but did not make a single appearance for Jurgen Klopp's side.

Despite that, the 26-year-old wants to return to Merseyside for preseason, to see if he still has any prospect of being part of the squad for the 2022-23 season.

Julien Laurens and Alejandro Moreno can't believe that Barcelona president Joan Laporta would admit publicly that he had hoped Lionel Messi would play for free.

- FC Salzburg striker Karim Adeyemi will choose to join either Borussia Dortmund or RB Leipzig in the summer, as has been reported by Sky Sports Deutschland. This comes despite some of Europe's top clubs, including Bayern Munich and Liverpool, both showing real interest in signing the 19-year-old prodigy.

The report says the youngster is looking for a foothold to play in his native Germany and could follow Erling Haaland's path of using Dortmund as place to acclimatise himself to the Bundesliga. The move to either Dortmund or Leipzig could be used as an eventual springboard to Bayern as a replacement for Robert Lewandowski whenever the Poland striker moves on.

- Barcelona don't trust Ousmane Dembele's agent, feeling that he will try to get the winger to leave for free rather than renewing his contract, as has been reported by Mundo Deportivo. The Frenchman's deal culminates in the summer of 2022, with the likes of Manchester United and Liverpool having shown interest in signing him. The belief is that Dembele, who returned to Barca training on Monday after months on the sidelines following surgery, is keen to stay while his agent is already talking to other clubs.

- According to Sky Sports, Chelsea centre-back Antonio Rudiger is weighing up his options and is not in discussions with the Blues about a contract extension, though staying put remains viable. The Germany international's deal comes to an end in the summer of 2022, meaning he will be free to discuss a potential move with foreign clubs in January. It is reported that up to six of Europe's top clubs are willing to offer him a contract.

- Club Brugge attacking midfielder Charles De Ketelaere, who scored for Belgium against Italy in the UEFA Nations League, is receiving plenty of interest, according to Calciomercato. The Italian outlet says that Serie A giants Napoli and AC Milan want to sign the 20-year-old, while Premier League pair West Ham United and Everton are also looking at him.

- Manchester United will consider a cut-price £15m deal for Jesse Lingard if he continues to refuse a contract extension, according to The Sun. The England international has struggled for starts and his deal comes to an end at the end of the season. The 28-year-old has been offered a new contract worth £135,000-per-week, but wants assurances that he'll get game time.

- Free agent Sergio Romero is expected to sign his contract at Venezia, as has been reported by Fabrizio Romano. The former Manchester United goalkeeper had a medical and needs the final details fixed before joining the Serie A outfit. Chelsea were considering the Argentine before signing Marcus Bettinelli.