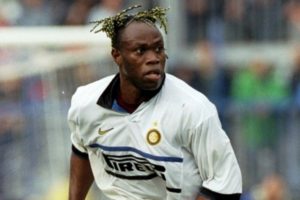 Former  France international is one of the greatest strikers of all time and a terror to defenders, but he never liked playing against a former AC Milan star

Arsenal and Barcelona legend Theirry Henry has said that former Super Eagles defender Taribo West is the most difficult opponent he ever faced in his career.

Henry and West faced each other during their time together in the French Ligue 1 and Italian Serie A. The World Cup winner was with Monaco when he came up against Taribo, who was on Auxerre’s books, in the Ligue 1.

Their paths would cross again in the Italian top-flight, with West at Inter Milan and Henry at Juventus.

Although they only played against each other in just a few games, West was able to leave a lasting impression on a young Henry.

, Henry named West when asked who the player he least liked playing against was.

“Because they were man-marking, he was following you everywhere, even in the dressing room”, The ex-Arsenal star added.

But despite his struggles against the colourful Nigerian and in the Italian Serie A, Henry would later go on to make a name for himself in the English Premier League.

Surprisingly, West also got to play in the Premier League with Derby, but he never got to face Henry in the 20 games he played for the team.