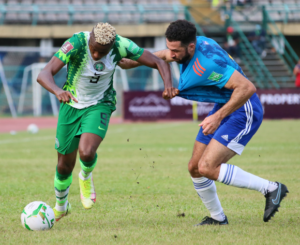 As a result, Super Eagles won Group C and progressed to the third round of qualifying, while the Blue Sharks’ hopes of qualifying for next year’s finals in Qatar diminished.

It took just a minute for the Super Eagles to break the deadlock through Victor Osimhen as he handed Nigeria a 1-0 lead after the Blue Sharks’ defence had failed to clear away Moses Simon’s cross.

However, the hosts lost concentration at the back and they conceded when Ianique Tavares, who is better known as Stopira, scored from inside the box to make it 1-1 six minutes into the game.

The Super Eagles then controlled the match, but they were wasteful in front of goal as Odion Ighalo failed to score from close range, before Vozinha pulled two good saves to deny Joe Aribo.

The score was 1-1 during the half-time break with Nigeria needing a draw or a victory in order to advance to the next round of qualifying, while Cape Verde had to win the game in order to secure progression.

The hosts continued to control the game after the restart and coach Bubista decided to introduce Willy Semedo and Nuno Borges on the hour mark as the Blue Sharks looked to take the lead for the first time.

Vozinha was always alert in the Blue Sharks’ goal-posts as the Cyprus-based shot-stopper came out rushing and snatched the ball, before the pacey Osimhen could pounce and hit the back of the net.

Nigeria coach Gernot Rohr made charges in the 78th minute as he introduced English Premier League stars Frank Onyeka and Kelechi Iheanacho with the Super Eagles looking to restore the lead.

Cape Verde had a chance to snatch a late winning goal when the ball fell kindly for Semedo on the edge of the hosts’ box, but his goal bound effort was blocked and ultimately, the game ended in a 1-1 draw.