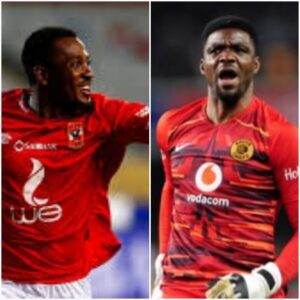 Two Nigerian players, Daniel Akpeyi and Junior Ajayi, are set to go head to head for continental glory when Kaizer Chiefs take on Al-Ahly in the biggest club football match on the African continent at the Stade Mohammed V in Morocco on Saturday night.

Akpeyi was the hero in Chiefs’ semifinal win over Wydad Casablanca. The former Warri Wolves goalkeeper pulled off seven stunning saves to ensure his side progress 1-0 on aggregate.

The 34-year-old will hope to replicate the same form in the final against the defending champions. But Akpeyi’s place in the lineup is not guaranteed yet despite his heroics in the semifinal.

Although he has played in six games in the competition this season, he’s no longer the first-choice goalkeeper at the club.

Akpeyi only played in the second leg of the clash against Wydad because Bruce Bvuma picked up an injury ahead of the game.

It remains to be seen if Amakhosi coach Stuart Baxter will stick with the Nigerian or go with his first-choice goalkeeper.

Meanwhile, Ajayi’s situation is also similar to that of Akpeyi, although he has played nine times for Al-Ahly in the competitions this season.

The 25-year-old only played for 32 minutes in the second leg of the semifinal win over Esperance after missing the first leg.

Ajayi has two goals in nine appearances in the competitions this season, but he’s unlikely to start on Saturday night.

However, he could be an option from the bench for Al-Ahly manager Pitso Mosimane. The former CS Sfaxien star has been unlucky with injuries, but he’s fit for the big clash.

Al-Ahly will be hoping to win their tenth Champions League title and second in a row, while Chiefs are playing in their first final.

It’s the third time the Egyptians are playing in the final as defending champions. They head into the final as favourites, having lost just once in the competition this season- a 1-0 defeat to Simba FC in February.

For Kaizer Chiefs, aside from the trophy and prize money at stake, it’s also their only chance of playing in the competition next season after they finished outside the qualification places in the Dstv premiership last season.

Chiefs will be hoping to become the third South African club to win the trophy after Orlando Pirates and Mamelodi Sundowns.