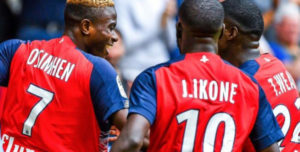 Two goals from Victor Osimhen and Araujo helped put Lille back to winning ways as the hosts edged Angers 2-1 at the Stade Pierre Mauroy, Friday night.

Victor Osimhen found the back of the net yet again for Lille against high flying Angers to make it six goals in six matches for club and country to confirm his ratings as one of the best young talents in Europe at the moment.

The Nigeria international scored his fifth goal of the Ligue 1 season in the 38th minute to hand Lille a precious lead, a few days after netting his first goal for the Super Eagles in a friendly tie with Ukraine.

The 20-year-old forward was the quickest to react as the Angers goalkeeper spilled a fierce drive from Jonathan Bamba, leaving the Nigeria international to bundle home the loose ball

Luiz Araujo extended Lille’s lead early in the second half to ensure that Stephane Bahoken’s strike three minutes from time was nothing but consolation for the away side.

The win is Lille’s third of the season with all the victories coming in the familiar surroundings of their home ground. Le Dogues two away games have ended in defeats.

Lille switch attention however to the UEFA Champions League as they travel to the Netherlands to square up against last year’s semifinalist Ajax.

It would be Victor Osimhen’s first ever match in the competition. Chelsea and Valencia make up the other teams in a very even-looking group