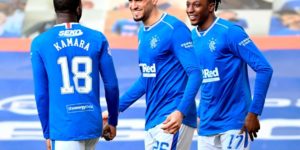 Van Bronckhorst replaces Gerrard, who left the club last week to take up the vacancy role at Aston Villa. Rangers confirmed the appointment of the former Barcelona star on their website, with his first game in charge set to be the Gers League Cup semifinal clash against Hibernian on Sunday.

Super Eagles stars Joe Aribo and Leon Balogun should play in the encounter, and they will be eager to make a good first impression under their new boss,

The former Dutch international is back in a familiar environment as he played for Rangers during his playing career. Van Bronckhorst won two league titles with the Gers and made 118 appearances for the club, scoring two goals.

He also played for Arsenal, winning the Premier League and Barcelona, where he won the Champions League in 2006.

The former Feyenoord manager main objective will be to ensure Rangers retain the Scottish Premiership title they won last year.

Rangers currently lead the table with 30 points from 13 games, four points ahead of Celtic, who have also played the same number of games.