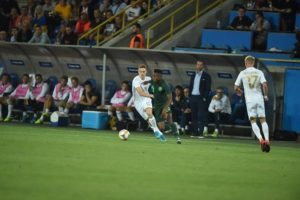 A cross session of players of the senior national team of Nigeria have expressed their unhappiness over the performance of Samuel Chukwueze in the Super Eagles 2-2 friendly draw against Ukraine, Owngoalnigeria.com reports

The players are unhappy with his reluctance to pass particularly in situations that would have led to goal when they were 2-0 up and hoping to put the game to bed with Ukraine struggling to cope.

Chukwueze’s refusal to pass the ball to teammates who were better placed on four different occasions was however played down by the manager after the game much to the surprise of other players of the team.

Owngoalnigeria.com gathered from a player who was part of the team to the 2019 Africa Cup of Nations that same issue of not passing the ball to teammates in better position caused some arguments between the Villarreal forward and Ahmed Musa.

Musa let out his anger on the forward during one the counter attacks against Algeria in the semi-final, a game the Nigerian team ended losing courtesy of a well taken free kick from Riyadh Mahrez in the dying minute of the game.