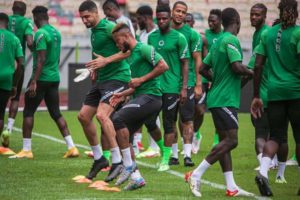 The Super Eagles will begin preparations for the 2021 Africa Cup of Nations in Uyo on December 28.

According to reports, the team will train in the Akwa Ibom state’s capital before moving to Garoua, Cameroon venue of their group games.

There are also plans for the Super Eagles to play at least three warm-up games before the start of the competition.

The Super Eagles have been drawn in Group D of the competition alongside Egypt, Sudan and Guniea-Bissau.

The three-time champions will open their campaign against the Pharaohs of Egypt at the Roumde Adija Stadium, on Monday , January 11.

The West Africans will then face Sudan four days later, before their final fixture against Guinea-Bissau on January 19.