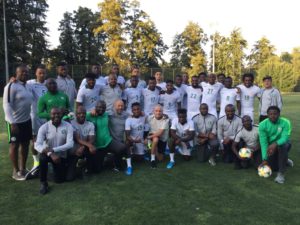 Players and officials of  the  Super Eagles are expected to Singapore on Wednesday for Sunday’s  friendly encounter against five-time world champions, Brazil,  reports Completesports.com.

The team will be lodged at the Fairmont Hotel, Singapore.

The game which is billed to hold at the Singapore National  Stadium, Kallang will kick-off at 1pm Nigerian time.

Head coach of the side, Gernot Rohr is expected to lead the team out for their first training session ahead of the game on Wednesday.

Brazil defeated the Super Eagles 3-0 the last time  both teams met in a friendly  encounter in 2003 at the Moshood Abiola Stadium, Abuja.

The Selecao will first square up against the Teranga Lions of Senegal on Thursday, before doing battle with the  Super Eagles  three days later.