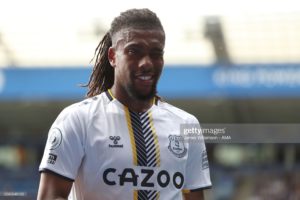 The Super Eagles midfielder continued in his new right wing-back role for the Toffees on Sunday, providing the assist for Vitaliy Mykolenko's opener at the King Power Stadium.

Frank Lampard's Everton went on to pick up a 2-1 victory that saw them leave the relegation zone after back-to-back victories following last weekend's shock 1-0 win over Chelsea.

Oliseh took to his

to praise Iwobi for his role, describing the 26-year-old's performance as 'simple and clairvoyant.'

"Simple, clairvoyant, hard-working, tracking back, changing play, and dictating the tempo, especially at a time when his club's survival in the 1er league is on the line. Kudos Lil Bro!!"

Iwobi first played in the right wing-back role for Everton in last weekend's victory over Chelsea at the Goodison Park, featuring for the whole 90 minutes as Lampard masterminded a daring victory over his former club.

The Nigerian international credited the upturn in his form to the arrival of Lampard at the club, stating that the English manager has reposed faith in him by not giving him extended playtime in the team.

Iwobi has started eight consecutive Premier League games for Everton since their 1-0 victory over Newcastle United on March 17.

Everton's victory over Leicester City took them up to 16th on the Premier League table with 35 points, one (1) point more than Burnley (17th) and Leeds United (18th) who have both played one match more.

Their consecutive victories over Chelsea and Leicester City is the first time Everton has won back-to-back league games since September 2021.