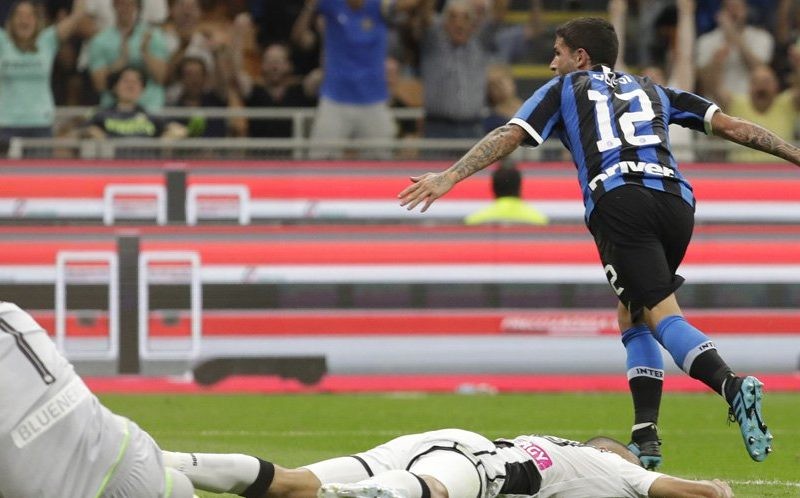 The impressive swashbuckling style Inter showed in their opening match of the Serie A season at the Stadio Meazza was replaced by a more pragmatic, and workmanlike performance against Udinese on Saturday.

Antonio Conte’s men ground out a result against the Zebrette, who made life even harder for themselves, or Rodrigo De Paul made life more difficult for his teammates when he slapped Antonio Candreva in the face to earn a yellow card. More on that later.

Nevertheless, Inter got three points and sit top of the Serie A table, though many at the club, including their coach, are not getting too carried away just yet.

He scored in his first game as an Inter player against Lecce, he was instrumental for Italy in Finland and bagged the winner on Saturday. The 24-year-old has made the step up from Sassuolo to the Nerazzurri look a breeze, and has become a fundamental building block of Conte’s side, showing a dynamism that Nicolo Barella should take notice of.

Even more so, he has an unnerving belief in his ability and going for a header – from which the goal came – against a defender that stands 1.91m tall, given he is just 1.68m, demonstrates just that. Sensi is on the right track to be the revelation of the Serie A season.

What was De Paul thinking?

In the age of VAR players must know they need to be on their best behaviour, a fact which makes De Paul’s blatantly obvious slap on Candreva even more puzzling. What was going through his mind at the time only he knows.

There was provocation by Candreva, with a finger along the Argentine’s face and some – more than likely – naughty words. However, that doesn’t excuse the reaction or the predicament De Paul put his teammates in, as up until that point the Zebrette were having the better of the match.

Vital in Udinese’s win over AC Milan earlier in the season, De Paul may well have cost his side a point or three on Saturday, and with the subsequent ban that will be enforced, the ultimate penalty may be even more.

Yes, Inter are top of Serie A. Yes, we’ve only played three rounds. There is still a long way to go, and while previous seasons may have seen sold scenes of celebration, the fans and the club, and most of all Conte are keeping their feet firmly planted on the ground. There is still work to be done Conte exclaimed after the match, though his biggest achievement may be staving off that seasonal ‘pazza’ Inter moment.