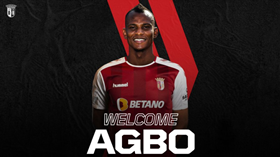 Portuguese Primeira Liga outfit Sporting Clube de Braga have informed via their official website that they have reached an agreement with Standard Liege for the transfer of Uche Agbo.

The Nigeria international has signed with The Arsenalists a loan agreement valid for one season with an option to buy included in the contract.

The central midfielder and defender had been linked with a summer transfer to KAA Gent, who were looking to sign a replacement for Anderson Esiti, but the deal fell through.

Uche has been playing for European clubs since the 2013-2014 season, having joined Udinese who loaned him to Granada before he was transferred to Watford.

He returned to Spain to play for Rayo Vallecano in the second half of last season.