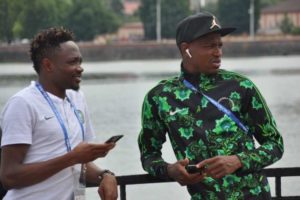 Super Eagles handler Gernot Rohr had revealed to newsmen that Eagles’ Assitant Captain Ahmed Musa will not be involved at all in Sunday’s International friendly against Africa Number One team the Teranga Lions of Senegal on health grounds.

“Musa is sick as a result of this he will not play against Senegal”, the Eagles Coach disclosed this from Ismailia, Egypt.

The Franco-German football tactician also declared Eagles right back Shehu Abdullahi and team’s striker Henry Onyekuru not fit to play as a result of ill health.

“We have done a lot of training here in Ismaila but not for three players who are sick today and they are Ahmed Musa like I told you and Shehu Abdullahi and also Henry Onyekuru”, Rohr disclosed.

He, however, confirmed the two players namely Oghenekaro Etebo and Chidozie Awaziem who were earlier knocked down with cold while training in Asaba, Delta State are fit to play against Senegal.

“Etebo and Awaziem have recovered from illness and they have been training with us. So they are available for selection for the big match against Africa’s best team Senegal”, Rohr said.

The Coach is also ambitious to win the match to boost the confidence of his team.

“Yes, of course, we are playing to beat Senegal for the confidence of the team. Senegal is very strong we know but this is football. We will test our strength and readiness against them in the friendly “, Rohr disclosed yesterday from Egypt