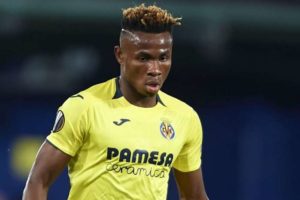 Chukwueze began the season with a bang – getting a goal as the Yellow Submarine were forced to a 4-4 draw against Granada.

Roger Marti’s second-half brace powered the Frogs past the visitors who got their lone striker through Gerard Moreno.

Despite their dominance, the Estadio de la Ceramica giants through away several scoring opportunities with Ekambi the main culprit.

In the second half, Levante clawed their way back into the game to win thanks to Marti’s penalty goals. In the 68th minute, the Spaniard fired past Andres Fernandez after Ekambi fouled Enis Bardhi on the edge of his goal area.

Five minutes later, Marti sealed his brace after he was upended by goalkeeper Marti.

The game at Ciutat de Valencia was Chukwueze’s 28th Spanish top-flight outing. He is expected to lead Villareal’s frontline when they host Real Madrid in their next fixture.