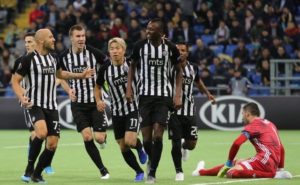 The top scorer for Nigeria U23 at the Rio 2016 Olympics Sadiq Umar has been rewarded for his brace in the Europa League for Partizan Beograd in their 2-1 win over Astana with a spot in the team of the week, Owngoalnigeria.com reports.

Umar who is on loan to the Serbian side from Italian Serie A side Roma struck both goals for his team to increase his goal count for the season to seven in nine games in all competitions.

The brace has not gone unnoticed by the technical team of European football governing body UEFA as he has been handed a spot in their weekly team of the week, usually compiled after round of games in the tournament which is Europe’s second club tournament when compared to the UEFA Champions League.

Jololo as Sadiq is called by close friends and associates made the two man attack of the team of the week alongside PSV Eindhoven forward Donyell Malen. Both players got a brace in the round of games that was played yesterday.