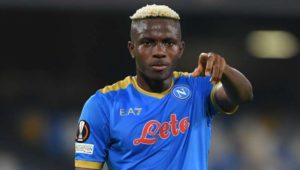 Former Lazio manager Delio Rossi has disclosed that it will be difficult for Napoli to win the Serie A title without Super Eagles striker, Victor Osimhen.

Osimhen, who is gradually recovering from his facial wounds, was spotted in training on Wednesday with his fellow teammates.

The Napoli forward was expected to be out of action for three months, but it has been only three weeks since he had surgery.

In his absence, Napoli has won just one of four matches in all competitions, with Il Partenopei dropping to third on the league table.

Reacting to this, Rossi in a chat with Tuttomercatoweb stated that Napoli can only win the Scudetto with Osimhen on the field of play.

“They all have the same possibilities. The championships are decided in March,” Rossi told Tuttomercatoweb via TuttoNapoli when asked name who would win the championship.

“Napoli lost Koulibaly and Osimhen, for a period they can compensate but in the long run, they can’t.

“We will have to see what happens to the other teams, which is why I say that everything will be decided in March.”