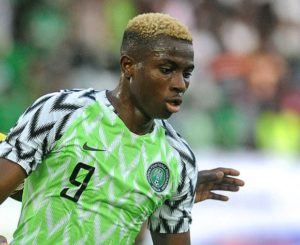 Victor Osimhen of Nigeria during the 2021 Afcon Qualifier match between Nigeria and Benin at Godwll Akpabio Stadium, Uyo, Nigeria on 13 November 2019 @Kabiru Abubakar/BackpagePix

The Lille striker has now scored three goals in his last two matches for Nigeria, following his latest brace against the Crocodiles of Lesotho on Sunday.

Osimhen scored two goals and assisted other two to help to Gernot Rohr’s men to a 4-2 win over their hosts in 2021 African Cup of Nations qualifiers.

Speaking at Sunday’s post-match press conference after the win against the Crocodiles, Rohr said the 20-year-old attacker learnt alot during Afcon as an understudy to Ighalo.

”We had the best goalscorer in the AFCON, he wanted to retire and we had to find a solution.

”When I took Osimhen to the AFCON as part of the 23-man list, a lot of you were very critical, they asked why I didn’t take Kelechi (Iheanacho) for example.

”He learnt a lot in the AFCON, watching, playing in the last match, seeing this very good goalscorer Ighalo, seeing Musa and now he is progressing.

”He’s in a good club Lille in France and scoring a lot of goals, confidence is there and this good understanding with the other players is good for a center forward.”

Osimhen has now scored four goals in eight games for the Super Eagles.