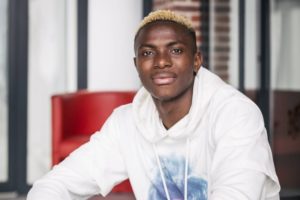 Nigeria forward Victor Osimhen has recounted his rough road to stardom following an impressive start to his career with French club, Lille.

Osimhen linked up with Lille from Belgian club, Sporting Charleroi this summer and has become a talismanic figure for Les Dogues.

The young striker has scored six goals in eight league appearances for Lille this term.

But the journey to stardom has not been a roller coaster ride for the fast rising star.

“I lost my mom in October, I do not even remember the year. I was small. Three months later, my father lost his job. It was very hard for our family. My brother sold sports newspapers, my sister, oranges in the street and me, bottled water in Lagos in the middle of the traffic,”Osimhen told France Football in an exclusive interview.

“We have to survive so we stick together. In the evening, we were all together and we gathered the money on the table. We gave everything to our big sister and she made food and organized everything.

” Part of my life has been a struggle to survive. But that’s all I am today in the end. It’s hard to classify all that but each event has created my personality. ”

Osimhen first made the headlines after his superlative showing for Nigeria’s U-17 side at the 2015 FIFA U-17 World Cup in Chile where he won the Golden Boot and Silver Ball awards.

He further revealed how tough it was living in Olusosun area of Lagos back then.

“Where I grew up, people live on the other side of an open dump. With my friends, we went there every Friday or Sunday to find crampons and shoes. We stayed there a long time. It was funny ! We saw it as a game but when you think about it … It was always a fight. We were looking for crampons,”he added.

“Sometimes you see, you found yourself with a Nike on the right foot and then you start looking for the other foot … And finally, you find the left foot and it’s a Reebok! My sister patched everything up and it was good. It was survival. ”

Despite a blistering start to his career with Lille, Osimhen is adamant he still has so much to offer

“Olusosun … This is not a place that offers you promises,”he stated.

“I often think of where I come from and where I want to go. I still have a long way to go. When I think of Olusosun … This is not a place that offers you promises. But I never gave up. The path of my life has never been easy. When I come home or in my free time, I think about how I got there, the little celebrity that I have to manage. I read too. “