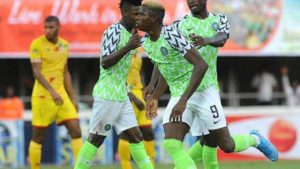 Lille and Nigeria international forward Victor Osimhen says his partnership with the duo of Samuel Kalu and Samuel Chukwueze in the attack of the Super Eagles.

Osimhen who scored from the spot‎ to draw Nigeria level watched on as one of his partners in attack Kalu scored the winner with an individual effort to hand the Super Eagles all three points. Chukwueze was also a thorn in the flesh of the defence of Benin Republic.

According to Osimhen, they can’t expect to play together all the time but if they do and play at their level, it’s hard to imagine the team that can stop them during games.

” Of course we have other great and senior players in the team who play same position like the three of us playing in attack, so we have to continue working hard if we want to keep our spot”, Osimhen told Owngoalnigeria.com.