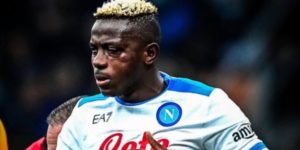 Nigeria’s Super Eagles have suffered a massive blow ahead of AFCON after it was confirmed that star striker Victor Osimhen would miss the tournament in January.

Osimhen picked up two nasty injuries in Napoli’s Serie A encounter against Inter Milan on Sunday evening at the San Siro Stadium.

The 22-year-old’s collision with Inter defender Milan Skriniar left him with a swollen eye and cheekbone. Tests after the game revealed Osimhen suffered an orbital fracture and also broke his cheekbone, with Napoli confirming he would need surgery.

The former Lille star surgery took place on Tuesday morning, and it was successful. However, Napoli released a statement that he would miss three months of action, which effectively rules him out of AFCON.

Napoli’s statement read: Victor Osimhen was operated on this morning by Prof. Tartaro, assisted by dr. Mario Santagata and in the presence of dr. Canonical, for a reduction and restraint operation of multi-fragmentary and displaced fractures of the malar bone, of the zygomatic arch and pommel, of the floor and lateral wall of the orbit, and of the diastasis of the fronto-zygomatic suture.

The synthesis of the bone abutments was done with titanium plates and screws.

The player is fine and will remain under observation for a few days.

The prognosis is estimated to be around 90 days.

This latest news is a big blow for the Super Eagles, whose hopes of winning a fourth continental title rest on the shoulders of the former Lille star.

Osimhen has been Nigeria’s leading man since 2019.  The 22-year-old has scored 10 goals in just 19 appearances for the three-time African champions.