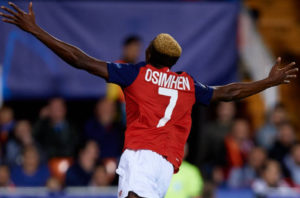 Victor Osimhen was on target for Lille Metropole in the UEFA Champions league match with Valencia at the Mestalla on Tuesday.

Osimhen, who failed to find the back of the net in his last five games for Lille, finally scored his first away goal since joining the Club.

The 20-year-old put Lille ahead in the 25th minuted after he jumped on a loose pass inside Valencia’s half before finishing past Jasper Cillessen in goal.

However, Valencia late come back show rendered the goal meaningless as the home side turned the tie around by scoring four goals in 25 minutes to seal the win.

Osimhen’s goal at Mestalla is his second in the Champions League and ninth in 16 appearances for Les Dogues.