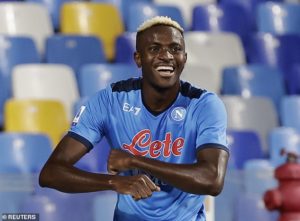 Nigeria forward Victor Osimhen has claimed that he will be fit to play in the Africa Cup of Nations (AFCON) next month, despite suffering a horrific facial injury while playing for Napoli last month.

The 22-year-old fractured his eye socket and cheekbone in a sickening head clash with Inter Milan defender Milan Skriniar during a Serie A match, and was originally ruled out of action for three months.

With AFCON set to get underway at the start of January, it seemed that Osimhen's chances of playing in the continental tournament were all but over.

'I will be available for AFCON unless if [sic] am not among the players picked to represent NIGERIA,' he posted on Tuesday.

Osimhen's return would be a huge boost for Nigeria as the young striker has been a revelation in Serie A this season prior to his injury setback.

He has scored nine goals in 14 appearances across all competitions for Luciano Spalletti's men, leaving Napoli just four points behind leaders Inter, while the side also progressed through to the knockout stages of the Europa League.

Osimhen has an impressive international record of 10 goals in 18 matches, though, and has become a regular starter in the team over the past 12 months.

Therefore, if he is available, he is likely to go straight into the team as Nigeria go in search of their first AFCON title since 2013.