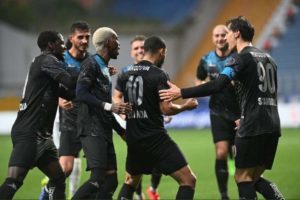 Nigeria duo of Henry Onyekuru and Babajide Akintola were on sung as Adana Demirspor beat Kasımpaşa 1-4 to stay on top of the Turkish Super Lig on Saturday.

It was the third and second goal of the season for the Nigerians as Adana Demirspor who have garnered 21points from 10 matches, opened a 3point gap off 2nd placed Besiktas who were yet to play their 10th league game of the season.

Adana Demirspor who has now gone seven matches unbeaten did it in style at Kasımpaşa's Recep Tayyip Erdoğan Stadium, scoring the first goal courtesy of Younes Belhanda in the 37th minute.

Akintola then made it 0-2 for the visitors going into half-time.

Kasımpaşa got themselves back into the game as Stephane Bahoken made it 1-2 in the 56th minute.

Super Eagles winger, Onyekuru whose goal in the 30th minute was ruled out by VAR for off-side, then restored Adana Demirspor's two-goal cushion for their third goal of the game.

Badou Ndiaye then capped Adana Demirspor's fine evening by putting the icing on the cake for the 4th goal in the 86th minute.

Vincenzo Montella, Adana Demirspor's head coach said after the game: "I am really happy with this win. We got it against the strong and organised team. Players stayed focussed until the end of the game."

Adana Dremispor now sit top of the Super Lig with 21 points from 10 games.