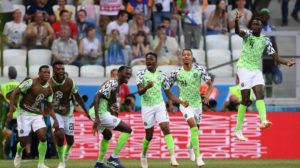 Nigeria footballers have been encouraged to move to Saudi Arabia and embrace ‘one of the hardest leagues’ in the world.

Super Eagles skipper, Ahmed Musa, who plies his trade with Al Nassr in the Saudi Premier League, has revealed that the sincere hospitality and warm affection of the Saudi people has made his stay in the country worthwhile.

The 27-year-old scored seven goals and registered as many assists as defending champions Al Nassr cruised to another league title last term.

However, the SPL has seen five different winners since 2012 a testament to the strength and competitiveness of the Saudi championship.

There are a few Nigerian born footballers such as Al Shabab left back Imran Ilyas Bakur and Abha’s Reuben Gabriel and some others in the second division who have already made Saudi Arabia their home. Ahmed Musa however encourages more of his compatriots to embrace the Saudi challenge.

“The SPL is one of the hardest leagues. The people may look at it as very easy, but I don’t think so,” the Super Eagles skipper told the Saudi Gazette.

“Many people think the league is easy, but when you play here you know it’s not that easy.

“The fans here are crazy about football, they’re not the same as Europeans.”

“When I first came here, it was difficult for me because of how much fans love football — they don’t want to lose! Over here, fans are always crazy when you lose a game.

“One of the best moments here is whenever I go out [and] everyone wants to take a picture with you. I give the Saudi fans credit for this.

“Back in my country [Nigeria], everyone always comes to Saudi, so I know the lifestyle here. So, nobody asks me how I cope or what I do in Saudi because most Nigerians are always here.”