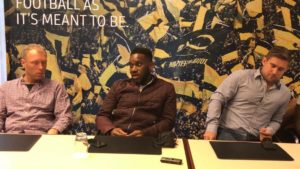 Nigerian Great Austin Jay Jay Okocha says the discipline brought to our games in the continent of Africa by German coaches in the past has contributed strongly to the growth and development of the game.

Okocha who is a Brand Ambassador of The Bundesliga played alongside Ghanaian great Tony Yeboah at Eintracht Frankfurt in the early 90’s where he was a delight.

He made these comments at the Steigenberger Hotel where he met a slected number of sports journalist who are in Germany as part of the Bundesliga and StarTimes Media Tour to Germany.

Quite a number of German coaches have managed various national teams over the years with the legendary Winnie Schaefer leading Cameroon to a fourth nations Cup honours in Mali in 2002 with as many African players also benefiting at the club level.

For the Super Eagles legend, these opportunities cannot be overlooked..

“For me, what stands out is the discipline and the organization they bring into our game. We in Africa have and would always be blessed by raw talent but thee grassroots development programs that we have in Africa is next to nothing and it is important for us to learn about the basics of the game from an early age.

"Some of us do not do that until we come to Europe and Germany for me is a great place for a young African player to com and develop. We learn a lot more quickly than any other place because for me because the Germans give the opportunity for players to develop. We have seen so players in the past including myself and in recent times Naby Keita who has since been snapped up by Liverpool in the Premier League, he said.”