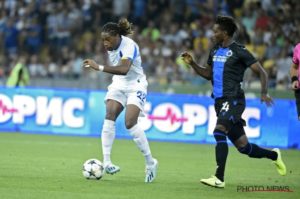 Nigerian duo, David Okereke and Emmanuel Blessed were in action as Belgian side, Club Brugge held their hosts Dynamo Kiev to a thrilling 3-3 draw in the second leg of their UEFA Champions League Third Qualifying Round fixture in Kiev on Tuesday night, report

Club Brugge progressed into the Champions League Playoffs 4-3 on aggregate, having won the first leg 1-0.

Okereke started the game and was replaced by Lois Openda eight minutes from time.

The 21-year-old who has hit the back of the net four times in the Belgian League this season is yet to score for Brugge in the Champions League qualifiers.

Blessed who was also in the starting line-up was replaced by Senegalese forward, Krepin Diatta in the 52nd minute.

Brugge were reduced to 10-men six minutes from time when South African striker Percy Tau was sent off for a second bookable offence.