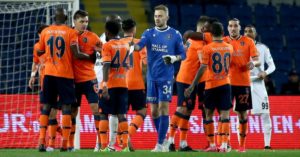 Okechukwu, joined Basaksehir last summer on loan from Egyptian side Pyramids FC and has made 31 appearances across all competitions for the club, including 17 in the Super Lig.

The 23-year-old midfielder was, however, not involved as they secured their 20th win of the season, against Kayserispor.

Ba, who has bagged 12 goals in the Turkish top-flight, featured for the duration of the game in his 39th appearance for the club this season.

Following the league’s success, Ba and Okechukwu have taken to social media to share their feelings.

After three years at Malatya Arena, the midfielder left for Egypt in the summer of 2018 to team up with Pyramids FC.

The forward, who had 22 caps for Senegal, had previously featured for Premier League clubs Chelsea, Newcastle United and West Ham United.

The 35-year-old striker has also previously played for Mouscron, 1899 Hoffenheim and Turkish sideGoztepe.