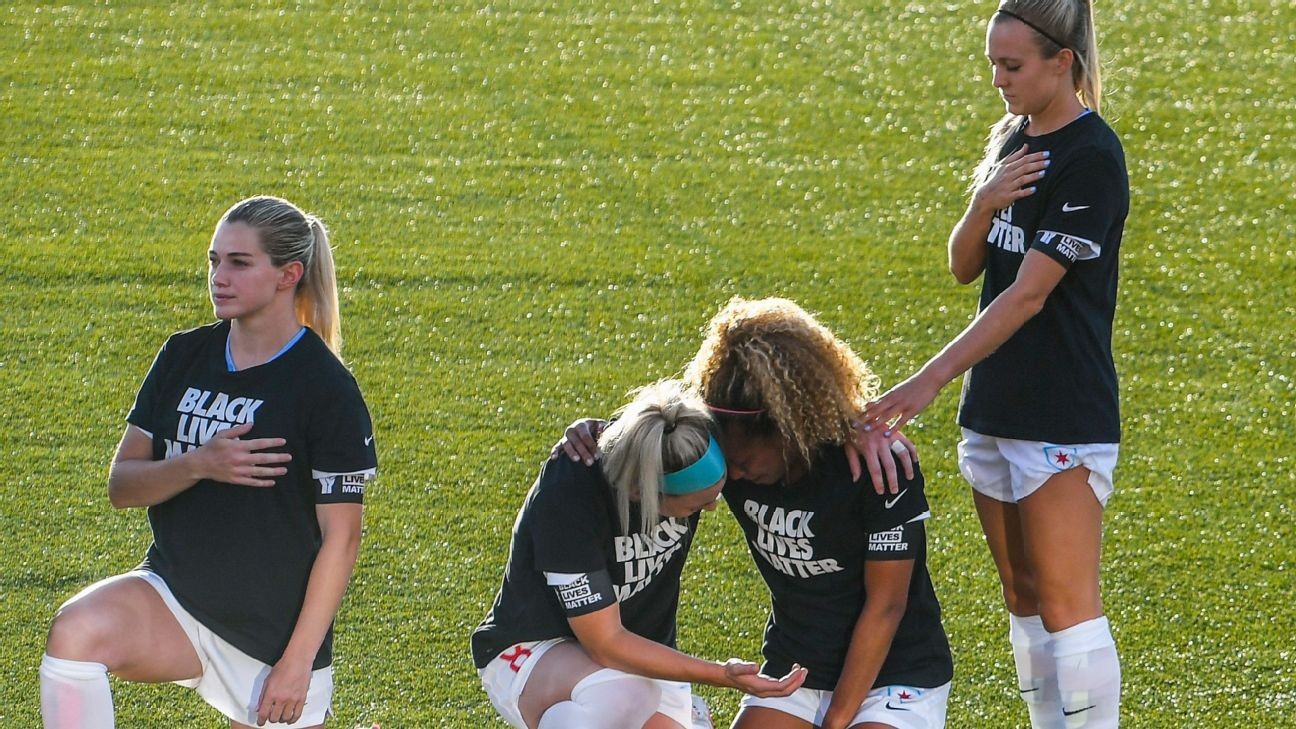 Players in the NWSL Challenge Cup now have the option of remaining in the locker room during the national anthem, the league announced in a statement Monday.

The change comes after the first two games of the league's return to competition this past weekend produced striking images of most players kneeling during the anthem but some choosing to remain standing -- images that arguably overshadowed the games that followed.

"The NWSL stands behind every player, official and staff member," the league said in a statement that noted it consulted with players, club officials and other stakeholders. "Kneel on the field. Stand with your hand over your heart. Honor your feelings in the privacy of the locker room or at midfield."

Although there are no fans in attendance for the Challenge Cup, a 23-game month-long tournament in the Salt Lake City area marked the return of professional team-sports leagues in the United States over the weekend. The NWSL continues to play the anthem before games, with all matches televised or streamed online, and Saturday's broadcasts including the anthem.

All 22 starters knelt during a live performance of the anthem before Saturday's nationally televised opening game between North Carolina Courage and Portland Thorns. Players from those teams then released a joint statement explaining they were protesting "racial injustice, police brutality and systemic racism" with the gesture.

But the images from the day's second game between Chicago Red Stars and Washington Spirit were less congruent. Four starters remained standing during the anthem, including at least one from both teams. In the same camera shots, Red Stars and U.S. national team midfielder Julie Ertz appeared to console club and international teammate Casey Short as she wept while the pair knelt.

Ertz and Short did not comment on the moment captured in a photo disseminated on the league's official Twitter account, with the standing figure of teammate Rachel Hill next to them.

All payers wore Black Lives Matter shirts during the anthem and knelt in a subsequent moment of silence immediately preceding kickoff, as seen across European professional leagues in recent weeks.

Red Stars owner Arnim Whisler tweeted after his team's game that "We are unanimous and committed in our support of BLM" but that no one should feel pressure to either stand or kneel during the anthem.

"'[J]udging someone you don't know is wrong," Whisler said in a series of tweets. "Making all players stand is wrong. Making all players kneel is wrong. And yes I think the anthem should be separate from players walkouts or not in stadiums for non national games."

Red Stars defender Sarah Gorden also knelt on the field during the anthem and explained her reasoning in an Instagram post Sunday.

"I'll stand when the people behind bars aren't disproportionately black or Latino," the caption read. "When my son can go to his neighborhood school because it has the same resources as the one we applied to in the wealthy white neighborhood. When black people aren't denied bank loans or employment for having 'black names.'

"When black people have more than 2.7% of the countries wealth when they make up 15% of the population. I'll stand when black mothers aren't 3x more likely to die in childbirth than a white woman. When police officers are held accountable and sent to jail for murdering innocent black men and women. I'll stand when the country looks the same for my black son as it does for your white son/daughter. Until then, I kneel."

Washington forward Ashley Hatch was among the starters who chose to stand during the anthem before her team's game Saturday. Hatch subsequently posted on Instagram that she planned to donate all money from bonuses received for goals to the NAACP and DC Scores, a local organization that "creates neighborhood teams that give kids in need the confidence and skills to succeed on the playing field, in the classroom, and in life."

She scored one of Washington's two goals in its opening win.

"I spent a lot of time learning, trying to understand, and discussing the issues with those closest to me," Hatch wrote in her post. "I want to be clear that I do my best to love and respect everyone the best way I can because I believe we are all brothers and sisters."